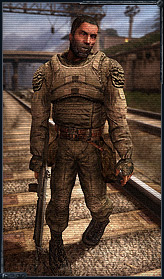 First Sergey thought they were common stalkers sticking in group. Then, however, something alerted him in their behaviour only to make him instantly lie down holding the gun in front of him. A shout didn’t have any effect – these two failed to react in any way. When they came up closer, he had no single doubts remaining – the non-coordinated movements, rambling murmur, dragging feet. He faced zombied stalkers.

Sergey didn’t want to approach them fearing to recognize someone out of his friends missing in the Zone. He fired several times preventing the zombie from opening fire in response...

Those who suffered extensive impact of radiators in Yantar or some other sectors. Incautious stalkers quickly become insane, turning into walking semi-corpses. They are plentiful in the Zone, some can even reach the perimeter.

This way or another, it is impossible to help them: the process of personality erasure is irreversible. Although zombied stalkers can still use their weapons, they are rather stupid. Encountering them you can hear them murmuring bits of phrases which, though, are fully meaningless. In time zombied stalkers completely lose all the previous skills and turn into zombies.

As a rule, they are very aggressive and pose serious threat when in masses.