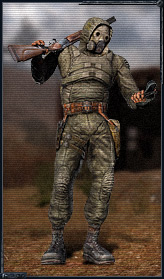 Mainly, loners perish in the Zone, you can’t be on your own here. Any rule, however, has exceptions. Gogol was exactly such an exception. It has been for two years now that he was stalkering, but never joined a single clan, preferring to stick on his own. This said, neither bandits, monsters, task force, nor the very Zone could do away with him.

Stalkers exploring the Zone on their own. Most of stalkers are loners as membership in grouping takes valuable time and thus reducing the income; besides, some are just inclined to isolation and independence.