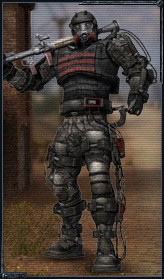 A clearly militarized group noted for its strict discipline, with members living according to a code.

Only Duty representatives refuse to trade unique items from the Zone with the outside world. According to rumours, all artifacts found by members of this group are passed to scientists.

Every member considers it his primary objective to protect the world from the Zone. Most of the group's operations concern destroying monsters, and so Duty's raids often save regular stalkers from many daily problems.

The faction has long been in a fierce war with Freedom.

Guys in camouflage with shield stripes were not just there in the vicinity of a "Freedom" camp to get a tan. "Dutiers" were sitting, concealed by trees and ruins, making not the slightest sound. Even when "targets" appeared in their view, they waited.

Only after letting their enemies come closer, they have revealed themselves, shooting to kill. None of the "free men" have escaped that day.

Wisp was the last one standing, cornered on the second floor of a desolate house. He returned fire for a long time, not letting the "dutiers" come near him. Them Shmelev ordered to blast him with grenades.
Wisp was still alive when they came. His right arm was ripped off, and he had a splinter in his stomach. Shmelev had to spend another bullet on him.