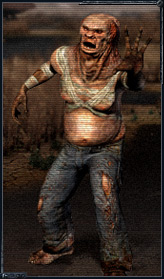 The secret service genetic experiments on criminals generated a new type of mutants. Controler appears to be one of the top-dangerous monsters in the Zone due to his outstanding telepathic abilities.

He attacks s.t.a.l.k.e.r.s, scientists, the military to kill and eat their body parts or leave them zombified. Once affected, the victim's brain becomes practically incurable. Controller lures animals (rats, smaller hogs, fleshes) to feed on them.

Able to control zombies at distance, forcing them to attack s.t.a.l.k.e.r.s. Prefers to move in a way so as to constantly keep the enemy in sight, thus climbing hills, roofs and trees.

Recognize him by half-human face with protruding black eyes, hypertrophied forehead and pulsing ulcers of blisters at temples. Acts with caution. Able of some talking.

Your best tactics against Controler is using shelters and grenades.